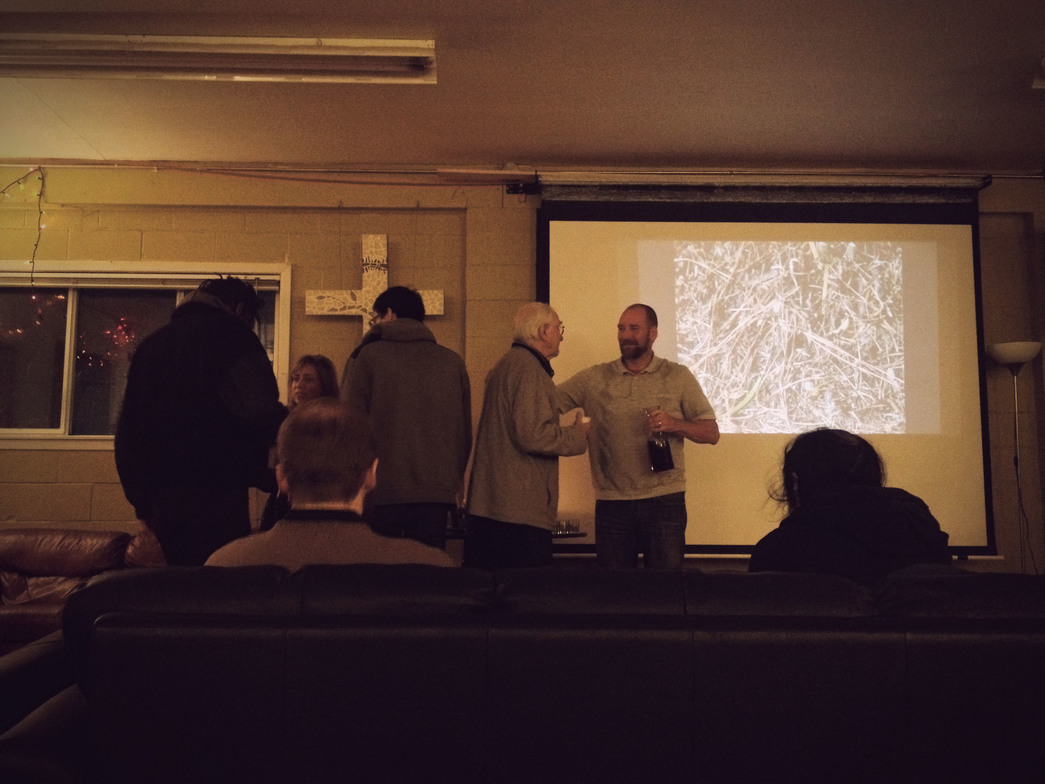 These last couple of weeks have been about reflecting on and absorbing the mystery of God With Us, Emmanuel, God in flesh born in Bethlehem.

Miriah brought her knitting and knit through the whole gathering. It was awesome. She says it helps her listen and concentrate and I completely understand what she means. If I’m drawing while I’m listening I engage in a completely different way.
Here’s an open invitation that I’ll try and remember to reiterate often, bring your knitting, drawing, cross-stitch, quilting, photoshop editing, whatever… if it’s something you do that’s calming and enjoyable, bring it along and make our time together generative.
This week’s text isJohn 1:1-18 and John’s wonderful metaphor of Jesus “the word.” We read through the text in the NRSV version.
Then we looked at how our Western way of thinking about the word “word” might be different from John’s way of thinking about the word “logos,” that gets translated as word.
Then we tried to hold those thoughts while reading through the text again, but from a translation called “The Voice.”
As a shorthand, we can call Western thinking “object-thinking” and Hebraic thinking “place-thinking.”
- Object-thinking tends to construe a world that is:
- Place-thinking tends to construe a world that is:
Then we ran the word “word” through the above matrix:
- Object thinking tends to understand the word “word” as:
- Place-thinking tends to understand the word “word as:
Semiotics of presence: Semiotics means meaning. Place-thinking tends to see presence, two people standing in front of each other, as giving the word “word” meaning. Words happen and have meaning in a context of embodied presence.
Spoken word: Place-thinking, as an extension of presence, tends to understand the word “word” as meaning spoken word. John came from a predominantly illiterate culture. It’s really really hard or us literate beings to think in pre-literate ways. In John’s world, “words” would be spoken, stories around a camp fire, like C3PO telling the Ewoks his friend's story. Deeply relationally contextualized.
Dynamic: Place-thinking tends to understand the word “word” as meaning words given and received, spoken and heard, open ended and dynamic. Words are not set in stone and one directional (which is how Rome understood words to be), words are alive and imbued with possibility.
Connected: Place-thinking tends to understand the word “word” as meaning connected to deeply connected relational meaning (or connecting embodied presence). Words aren't objects we exchange. Words are the conduit through which networks of meaning connect, words link up my embodied present relational connectedness to the cosmos to your embodied present relational connectedness to the cosmos. Words are big.
Keep all that in mind, here’s the big swap: Rather than translate the word “logos” as “word,” which tends to push us literate citizens of the Western world in the direction of object-thinking, what if we lean in the direction of place-thinking and translate the word “logos” as “voice?”
Voice carries a place-thinking inflection that would be close to John's Hebraic perspective. There is an intimate personal dimension to “voice” that isn’t necessarily there in “word.”
So, if we read this passage as “the voice” rather than “the word,” how does that change things?
If speaking is a kind of acting in the world, and acting in the world is a kind of speaking, then the incarnation, on which we’ve been reflecting, is divine speaking. The incarnation is the voice of the father. Living the incarnation is the voice of the son.
Chew on that for a bit. Reread that last paragraph and mull it over. There’s a lot there.
We watched a Richard Rohr video from The Work Of The People. It’s kind of long, but it’s oh so good. You can find the video here and watch a low rez version. Rohr talks about “Jesus” and "The Christ" as being two different things placed together, sometimes as Jesus Christ. Christ isn’t Jesus’ last name. Jesus is the incarnate embodied fully human, fully divine person who lived 2000 years ago. The Christ is the eternal cosmic Christ. The eternal Christ-ness of Jesus is what John is trying to bring language to when he sets on the metaphor of “logos,” “the voice.” He is trying to hold Jesus and The Christ together in the mystery of the incarnation. He is trying to get hold of the ineffable, and it’s beyond words.
After communion and a final song, we read through a different translation of John 1:1-18. It goes like this:

1 Before time itself was measured, the Voice was speaking.

The Voice was and is God.
2 This celestial Word remained ever present with the Creator;
3     His speech shaped the entire cosmos.
Immersed in the practice of creating,
all things that exist were birthed in Him.
4 His breath filled all things
with a living, breathing light—
5 A light that thrives in the depths of darkness,
blazes through murky bottoms.
It cannot and will not be quenched.

6 A man named John, who was sent by God, was the first to clearly articulate the source of this Light. 7 This baptizer put in plain words theelusive mystery of the Divine Light so all might believe through him.Some wondered whether he might be the Light, 8 but John was not the Light. He merely pointed to the Light. 9 The true Light, who shines uponthe heart of everyone, was coming into the cosmos.

Jesus as the Light does not call out from a distant place but draws near by coming into the world.

10 He entered our world, a world He made; yet the world did not recognize Him. 11 Even though He came to His own people, they refused to listen and receive Him. 12 But for all who did receive and trust in Him, He gave them the right to be reborn as children of God; 13 He bestowed this birthright not by human power or initiative but by God’s will.

14 The Voice took on flesh and became human and chose to live alongside us. We have seen Him, enveloped in undeniable splendor—the one trueSon of the Father—evidenced in the perfect balance of grace and truth.15 John the Baptist testified about Him and shouted, “This is the one I’ve been telling you is coming. He is much greater than I am because He existed long before me.” 16 Through this man we all receive gifts of grace beyond our imagination. 17 You see, Moses gave us rules to live by, but Jesus the Anointed offered us gifts of grace and truth. 18 God, unseen until now, is revealed in the Voice, God’s only Son, straight from the Father’s heart.
~The Voice (accessed Jan. 09, 2014 at http://www.biblegateway.com/passage/?search=john%201:1-18&version=VOICE)