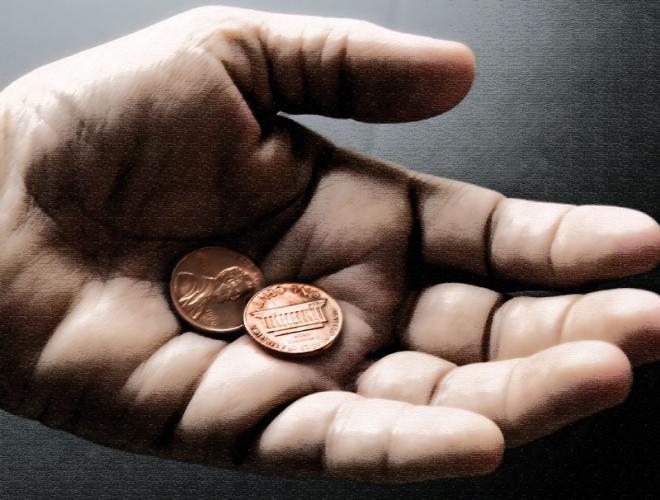 He sat down opposite the treasury, and watched the crowd putting money into the treasury. Many rich people put in large sums. A poor widow came and put in two small copper coins, which are worth a penny. Then he called his disciples and said to them, "Truly I tell you, this poor widow has put in more than all those who are contributing to the treasury. For all of them have contributed out of their abundance; but she out of her poverty has put in everything she had, all she had to live on."
Mark 12:41-44

Here we catch up with Jesus in the final scene of his public ministry as recorded in Mark. Jesus has arrived in Jerusalem riding on a colt, as if performing in a street theatre — the triumphant entry of a royal figure, revered by peasants. The king rides on to the temple, where he turns over tables and rages against the corrupt and oppressive ways of the religious establishment. . . Wow, does this guy ever stir things up!

His actions in Jerusalem, at the temple especially, provoke a series of tests: He is asked a political question about taxes and a religious question about resurrection, answering these with incredible grace and wisdom. Jesus answers the next question by saying that the law to love God, others and yourself is the very wellspring from which flow all other laws and indeed life itself.

Now, after being on the defensive, Jesus goes on the offensive in verses 39-40: "Beware of the scribes, who like to walk around in long robes, and to be greeted with respect in the market-places, and to have the best seats in the synagogues and places of honour at banquets! They . . . for the sake of appearance say long prayers."

He challenges the religious leaders on their entitlements: finery, salutations and honour. Clearly they were preoccupied with prestige, position and power. For Jesus to call them on this and to criticize it — this was radical. It would've been expected that these religious V.I.P.s have their robes, special greetings and reserved seats.

Let's stop here and ask ourselves what this might mean in our own lives. What are we doing to impress those around us? Are we acting falsely spiritual, or sympathetic, or happy, when we know deep inside that it's just for appearances?

I often find myself adding lines to my emails to make myself look more spiritual and dutiful than I really am. When I can't meet someone, I emphasize the super-important-urgent thing I need to attend to instead. I have this image of myself that I feel a need to keep up, all at the expense of being real. All of us put on "robes" and "pray long prayers" in our own ways. (Lets re-commit ourselves to being a no-BS zone at Mosaic!)

Jesus fearlessly exposes the hypocrisy of the religious leaders in verse 40: "They devour widows' houses. . ."

The well educated scribes were largely in charge of public documents and took charge of men's estates when they died, since their wives weren't considered capable of managing their own affairs. This often resulted in corruption and exploitation.

Can you imagine being in the crowd when that stinging accusation rang out? Part of you is nodding in agreement, glad someone is finally talking about this. But these are leaders that you have long been taught to respect. You also fear them for the power they wield over your life! You could probably cut the tension in that room with a knife.

Mark's next picture is of Jesus sitting down across from the treasury, a place where people could file by and give offerings to the temple. Jesus watched the rich giving from their riches, and calls it for what it is.

This is so incredibly relevant today. Every time I read in the paper about how some super-rich person gave 10 or 50 million dollars to a hospital or charity, my first thought isn't "Wow, what an amazing philanthropist," but rather, "Why, in a world where so many suffer, in a city where so many are without housing, does this one individual have a personal fortune obviously well in excess of $50 million in the first place?"

Something is wrong! Just as something was wrong in the temple. Jesus wasn't so much praising the woman for her sacrificial gift — although he clearly affirms her devotion — as much as he was decrying a system in which an impoverished widow (quite likely made poor at the hands of its scribes!) feels compelled to give all that she has in order to maintain her fragile standing in a religious establishment that benefits only the wealthy elite. A temple which, as we will find out in the following section of Mark, will one day be utterly destroyed.

Jesus does it again! Exposing a system and its people for what and who they are. The wealthy give out of their excess as part of a PR campaign for their image, while the poor are exploited and pushed further into poverty and powerlessness. This continues today. The "prosperity gospel" thrives in Western Christianity, so entrenched that its bias toward the wealthy is almost unbreakable — the poor have no place in it.

I think most people are convinced (although who would actually say this?) that God’s blessing is on the rich. The rich and successful are esteemed by the masses, their profiles filling the media. Take Mitt Romney. Running deeper than his arrogance, blunders, inexperience and an alarming free-market ideology, is the perception that he is successful and therefore somehow wise, good and blessed.

If you take this underlying reverence for the rich and add to it a fond admiration for their generosity (vis-à-vis philanthropy), we find the rich living in the self-reinforced belief that they/their efforts are blessed by God, while the poor live under the paralyzing curse of looking up to/at the rich, feeling little self-worth or hope for blessing. Now, I don't mean to vilify all rich people. I am saying, as Jesus was saying, something is messed up here!

Jesus cuts through the oppressive lies of these systems. It is a travesty that this poor woman gave up her last penny while the rich basked in the glory of a sum as large as it was meaningless. Seen clearly in the eyes of Jesus, the rich gave nothing and the widow gave everything.

What does this mean for us? As followers of Jesus, we are called to live honestly and with integrity. We are called to challenge and live counter to systems where the poor prop up the rich. We need to live as a community that elevates everyone, that lifts up and recognizes the true giftings of all, that brings everyone to the same table, God's table, and calls us blessed.