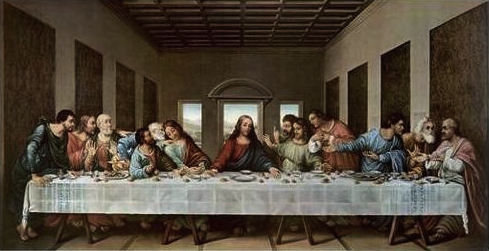 Today we have two amazing passages to ponder together— so amazing, in fact, that I couldn't choose between them! So let's look at both. First, from the gospel of John. . .

Last week we jumped back to Pentecost, when these individuals and communities experienced the outpouring of the Spirit, the event which initiated all of this change.

Now we trace events back further. We have moved through the liturgical season of Easter and Pentecost. Our transition into the season of Ordinary Time is today, Trinity Sunday, marking the revelation of the Trinity by Jesus to his disciples.

Let's go to the last supper before the crucifixion, described in the book of John. Jesus has just told his disciples that he is going to leave them, but that he will send "another" to come alongside them. . . (Understandably, they are pretty freaked out!)

So, as they are propelled toward the betrayal and crucifixion of Jesus, he shares his final words for them. He speaks of the Spirit that will "advocate" for them, abide with them and convict them (guide to righteousness).

But then he says something like this— "I have so much more to say, but I can't. . . It is just too much, it can't possibly be expressed or understood."

Basically, the only way you will get what I want to say, is by the Spirit I am sending. It isn't a matter of believing, of merely right thinking. I'm talking about a whole new way of living— of new life itself— and the Holy Spirit will bring this to you.

Here we have the Trinity revealed. Jesus, God incarnate and fully-man, talking about the Holy Spirit: that energy, relationship and dynamic that comes from the Father,  the ultimate, eternal being in the universe.

The writer Micheala Bruzzese puts it this way:

Our God also resists a singular identity or to be bound to a singular form of relating to us. The God who calls us to community is fundamentally a communal being, consisting of three persons. Some say this is because God, as love, spilled over into other "persons" with whom to relate in love. Thus our triune God is a never-ending being in relationship, creating and recreating in love.

Looking again at John, we hear Christ explain that the Spirit will guide us to truth by speaking whatever he (or why not she?) hears. . . She will speak of things to come, she will glorify Jesus by declaring to us what and who Jesus is and all Jesus has and the Father, too. So we can go forward in our lives, under the transformative power of the resurrection, as participants in the life of the Trinity!

Beautiful. The Trinity, the key to our understanding and experience of God.

We cannot fall in love with a concept. - Richard Rohr

How do you respond this this? How do you feel, being in the middle of the relationship between the father and the son?

And what does this mean, to "participate in the life of the Trinity"? On its surface, it's an other-worldly idea that evokes spiritual experience and even has an esoteric ring to it. But let's look at it through the lens of this week's second lectionary passage, in Romans. . .

Here it is again, the Trinity. Paul is writing to suffering disciples in Rome who are asking themselves, if we are following the true God, if this Jesus way is true, then why are we suffering? What have we done wrong? If we are reconciled to God, shouldn't life be a cake walk?

In short, Paul's answer is, no. His point is that since we are justified. . . we have peace, and access to God.

What is the fruit of this? First, we boast in our hope of sharing the glory of God. As we examined a few weeks ago, at the last supper Jesus said he was being glorified, right then and there (in the midst of his betrayals by Peter and Judas)— here Jesus defines glory as loving in a hateful world.

Second, Paul says we boast in suffering, not in ease. Why would we do that? Because of hope. Think of hope as reaching the very top of a tall ladder. It's scary, it's risky. For us, in the midst of suffering and uncertainty, to hope is to risk. So how do we dare to hope? Because of the Spirit.

Suffering leads to endurance; endurance to character; character to hope; true hope, thanks the transforming power of the Spirit.

We participate in the life of the Trinity so that we can share in the glory of God— loving in the midst of hate— and experience the light of hope even in our darkest hour.

When we finally figure out that the Christian life isn't about following a religion, trying our best, or even living right, but actually about being a participant in the life of the Trinity— that's when we know a life worth living.