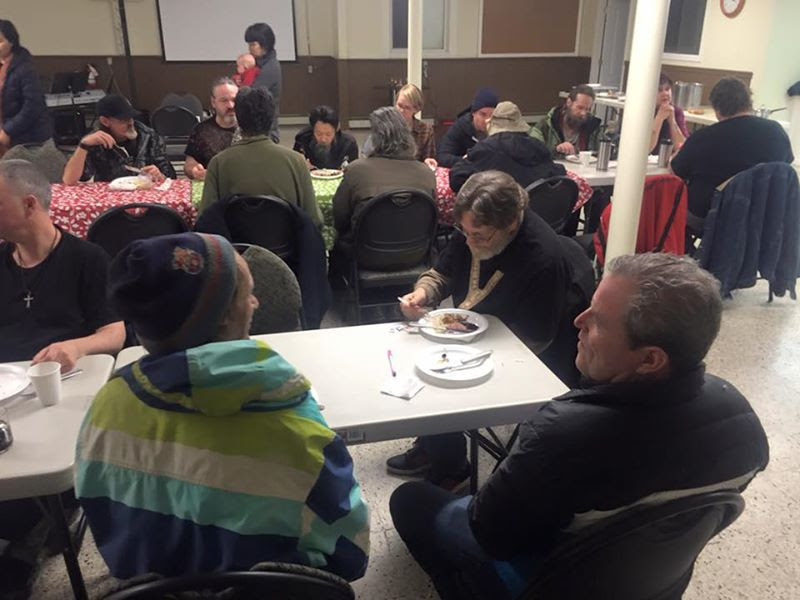 This week at Mosaic was considerably different than a normal week.

For starters, it was a quite beautiful afternoon in Vancouver, which for December is something of an anomaly. It’s amazing what a difference that makes. The number of Sundays where I actually get to enjoy walking through the neighborhood on my way to Mosaic are dwindling rapidly. When the skies are clear it means I get a nice walk. I can only imagine the difference the weather makes for those struggling for adequate housing.

When I arrived, the bulk of the set up had already been done. The coffee was brewing, and the communion bread was being prepared by a couple of people from the Mosaic community. A few chairs and tables where set up as normal, and we seemed to be well ahead of schedule. A man I didn't recognize walked in with what looked like a banjo case. His son ran behind him.

A couple more unfamiliar musicians came in carrying different shaped cases. At this point I got the instructions to put a few more chairs out which gave me a short term purpose.

“3 or 4 rows” I was told, because we will be having a joint service with other churches in the area. Sure enough, gradually more and more people were making their way in. I was setting up the coloring stations when I made eye contact with a young girl and her dad making walking through the doors. At Mosaic, we say the coloring stations are “for the kids”, but they’re not really. They’re for people who like to color and draw and express themselves or escape through that medium. It’s one of the many things I appreciate about Mosaic. There isn’t even any ironic laughter or comments when an adult picks up a crayon. Its normal and valid.

I decided to assign myself a sort ‘pseudo greeter’ role for all the new people, starting with this girl and her dad. One of the Mosaic community members had recently spoken at the college the girl attends. They had talked about what Mosaic is and what we do and it had connected with this girl so profoundly that along with her dad she had travelled from Surrey to see for herself.

Turns out I am a terrible ‘pseudo greeter’. By the time I had finished speaking with this girl and her dad, the room was over half full.

Meanwhile, the kitchen was filling up with crock pots. About half a dozen of them filled with soup. I was then assigned to ‘kitchen management’, a role neither myself nor my mother ever thought I would excel. I didn’t. However, standing in the kitchen and looking through the hatch which connects to the main hall, the room was now completely full, and people were scrambling to bring more chairs out.

People were hugging and laughing and talking. I’m pretty sure the Bible talks about a day when nations and kingdoms will come together to worship. I want to resist trite and poorly thought out symbolism, but honestly it was difficult to not read into this gathering an echo of what that day may look like.

I sort of just left the crock pots alone. I think that’s the point of them.

I took a seat as the service began with some music. Now there was a particular piece that I had heard the band practicing which I had really enjoyed, and looked forward to singing. As the words of that song came on the screen, I was a little excited to sing it.

“This,” I declared internally “…will be my contemplative moment”

As the intro played, a Mosaic community member I’ll call Brain, came over to me. A few weeks ago I had helped Brian move into new subsidized housing in the downtown eastside. Hopefully, it was an improvement on his previous situation, which was so bad, that he regularly chose sleeping in Stanley Park over it.

“Well, I dunno. If I stay, I’ll have to use my flash light to get to Stanley Park tonight, and my batteries are running out. I can't afford new ones.”

“Wait, you’re sleeping in the park tonight? How come?”

“The new place is just as bad as the old!! F**king guy next to me keeps tapping on my f**king wall. Its bulls**t.”

I shoot a glance at people around me; still singing.

I continued to talk with Brian as the song I wanted to participate in came to an end. Imagine having to choose between food and light? Tonight this is Brain’s reality. I was grateful when he said he’d stay for food.

The song ended and I somehow allowed myself to be frustrated that my interaction with Brian had caused me to miss it. As the service continued we kept talking.

One of the lessons I am learning all the time at Mosaic, is to asses and reassess my priorities. For myself, and perhaps so many others, I have been brought up to believe that once the service begins you are quiet and everything else shuts down. As Brian continued to talk, in not always the quietest voice, I relaxed in the growing belief that these moments are far greater than my awkwardness and discomfort and that what feels like bad timing is always God’s timing. Brian may have had to choose between food and light, but he will not have silence and loneliness; not at Mosaic.

When the service ended the crock pots were unleashed and all who were there had as much soup and bread as they could, and as much fellowship as they wanted.

There is a song I have been listening to a lot recently by a guy called Josh Garrels called “At the table”. I would encourage you to look it up. Never has the intersection between God’s great love and promises, and the Mosaic community been more vivid than in the chorus of that song. I will leave it with you.

Come on home, home to me
And I will hold you in my arms
And joyful be
There will always, always be
A place for you at my table
Return to me

What We Do
Quarterly Combined Church Service