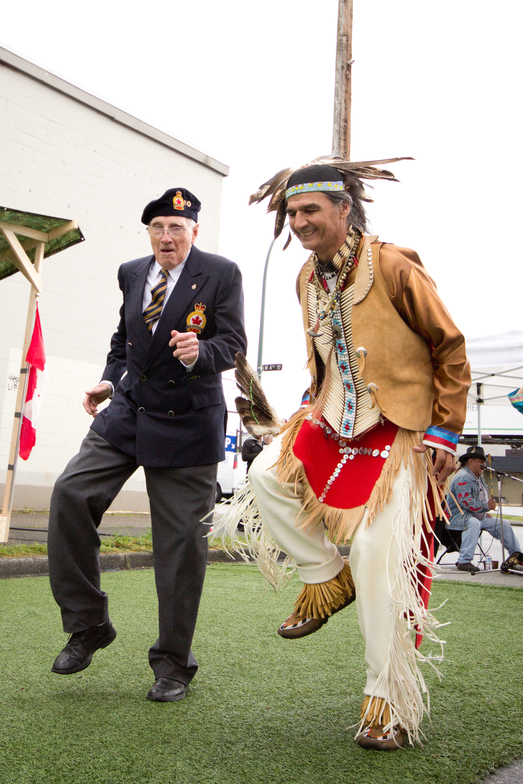 The past week has been a week marked with highs and lows for us at Mosaic. Last Saturday was the highlight of our yearly calendar, our National Aboriginal Day Street Party. It is the largest event on our yearly calendar. It takes our entire community and many partners all coming together to host an event intentionally focused on honouring our First Nations and Metis friends and members of our community.

Those who were able to make it to this year’s event ate salmon, perused artisan booth, and watched/participated in Pow-wow and Metis dancing. There were many smiles, abundant laughter, and the booming of the big drum. All told the day was a success as we continued to deepen and build relationships that cross cultural differences.

This highpoint, however, was followed by the announcement that the federal government gave a tentative approval of the Northern Gateway Pipeline. For many in our community this this came as yet another occasion where voices appeared not to be heard and opinions respected. This felt like a slight to the First Nations as it occurred between our National Aboriginal Day Celebration and the actual National Aboriginal Day this past Saturday. The sentiment amongst many in Mosaic’s immediate community feel like it is yet another incident in Canadian history where our First Nations brothers and sister have not had their voices recognized.

Though there are many perspectives regarding the Northern Gateway Pipeline all of them involve many overlapping conversations: those of economics and ethics, environmental conservatism vs. economic liberalism, partisan political manoeuvring, and the competing ideologies of economism and humanism. The debate is complex, and there are well intentioned people who come to very different opinions on the topic.

However, for those who watched the opposition parties grill the Harper government over this decision, it was an apt reminder of the reductionism of argumentation so often utilized in our current era. While the opposition parties brought ethical, environmental, and concerns of due process against the Harper government’s decision, the responses always shifted to a utilitarian economism where “facts,” “jobs,” and “growth” rule as unchallenged assumptions.

So where do we fit?

As a community of deeply human, flawed individuals we recognize the harm done by such reductionist views of humanity and the world. While we are broken and messed up we still refused to be reduced to a number, to a job, or to a percentage point of GDP. We are embodied, we are placed, we are valued.

This past Sunday, as we reflected on the roller coaster of a week that had just gone by, we took time to lament. Following the lectionary we found ourselves in the midst of Psalm 69, offering up a plea in the midst of a murky abyss. We lamented a system that too often reduces people to numbers, to profit, to GDP. Following Christ and the abundant full life we are called into, we lamented that current systems sometimes fails to dignify humans let alone the rest of the created order. The second part of the Psalm is a plea for God to act, to change the current system.

It is for your sake that I have borne reproach,
that shame has covered my face.
8 I have become a stranger to my kindred,
an alien to my mother’s children.

9 It is zeal for your house that has consumed me;
the insults of those who insult you have fallen on me.
10 When I humbled my soul with fasting,[a]
they insulted me for doing so.
11 When I made sackcloth my clothing,
I became a byword to them.
12 I am the subject of gossip for those who sit in the gate,
and the drunkards make songs about me.

But as for me, my prayer is to you, O Lord.
At an acceptable time, O God,
in the abundance of your steadfast love, answer me.
With your faithful help 14 rescue me
from sinking in the mire;
let me be delivered from my enemies
and from the deep waters.
15 Do not let the flood sweep over me,
or the deep swallow me up,
or the Pit close its mouth over me.

16 Answer me, O Lord, for your steadfast love is good;
according to your abundant mercy, turn to me.
17 Do not hide your face from your servant,
for I am in distress—make haste to answer me.
18 Draw near to me, redeem me,
set me free because of my enemies.

Do you not know that all of us who have been baptized into Christ Jesus were baptized into his death? 4 Therefore we have been buried with him by baptism into death, so that, just as Christ was raised from the dead by the glory of the Father, so we too might walk in newness of life.

With that we enter this next week raised to life, while not forgetting ourselves, or where we have come from. We walk into the next week with the hope of new life, that we are not conquered, nor are we reduced to a number, nor does a job, a bank statement, or a percentage of GDP define us. We are defined by life, by life through Christ, by a life made full through respecting and validating our neighbours: human and non-human, indigenous and otherwise, placed and displaced. It is a glimmer of this hope that we witnessed at out National Aboriginal Day celebration, a foretaste of what we long for.